Anyone on supplementary oxygen should have SpO2 monitored regularly, as the Group noted oxygen toxicity is an identified risk in other conditions.

However, in situations where there is an acute shortage of oxygen or other respiratory support therapy, or for individual patients with a clinical rationale, the Group acknowledge that a lower SpO2 target could be considered by clinicians and hospitals.

There is a paucity of direct evidence for different SpO2 targets in patients with COVID-19. In brief (refer to Evidence Summary below for further details), the Group considered evidence from prior to the COVID-19 pandemic from one systematic review and four individual randomised controlled trials comparing higher vs. lower SpO2 targets. One of the trials included patients with COVID-19, for which a post hoc subgroup analysis was conducted. The four trials deviated substantially from the PICO question pre-defined by the Group, and from each other, in terms of participant characteristics (including causes of their need for oxygen or respiratory support therapy), interventions & comparator target ranges, and outcomes. They also varied substantially in terms of the methods used to monitor SpO2, including frequency and invasive vs. non-invasive options. Furthermore, the COVID-19 subgroup analysed separately in one of the trials was too small and infrequently monitored to be considered as providing direct evidence. While adverse event measurement and reporting was also limited, and varied between trials, one trial reported a significantly higher proportion of patients being diagnosed with mesenteric ischaemia in the group with the lower SpO2 target. Despite the lower target in this trial being lower than those defined by the Group (88-92% vs. 90-94%), as this is a life-threatening event plausibly caused by hypoxia, the result raises safety concerns about routine use of lower SpO2 targets. Conversely, concerns about oxygen toxicity in other conditions were also noted. This evidence was all deemed to be too indirect to populate an ‘evidence to decision’ template for this intervention, but the Group applied ‘evidence to decision’ framework principles to the available evidence and Indian healthcare context to provide a recommendation.

During the peak of the second wave of the SARS CoV-2 pandemic, India faced a severe oxygen shortage. (1, 2)The government rapidly increased oxygen supply to various states. (3)Supplemental oxygen is the key intervention for severely and critically unwell COVID-19 patients. Oxygen is often administered liberally to acutely ill adults, but the evidence of benefit vs. risk of achieving high oxygen saturations in the blood is unclear. To preserve oxygen reserves and avoid wastage, various measures were looked at, such as:

a.  Timing of initiation of oxygen therapy,

b.  Target peripheral oxygen saturation (SpO2) range with the most clinical benefit,

d.  Timing of intubation and ventilation to achieve the lowest oxygen use

The two essential questions that needed an answer were the SpO2 cut-off point for initiation of oxygen therapy and the ideal target range of SpO2 that should be maintained while on oxygen and other respiratory support therapy. If a patient can be successfully treated at lower targets without complications, unnecessary over-oxygenation and oxygen wastage could be minimised.

In COVID-19, World Health Organization (WHO) recommends that the target SpO2 should be ≥ 90%, and supplemental oxygen should be initiated below this cut-off. While an upper limit was not prescribed, it was understood that the patient should have a Spo2 of 90% or above at all times.(4)The US National Institutes of Health, British Thoracic Society, Italian Thoracic Society and the ICMR Covid-19 National Taskforce (India)recommend a SpO2target of 92% to 96%. (5–7) This is based on the IOTA systematic review and LOCO2 randomized control trial, both based on non-COVID patients. (8, 9) While the IOTA systematic review includes a high-quality meta-analysis, the population and interventions included in the analysis were diverse. In IOTA, substantial weight was given to trials that included patients with myocardial infarction, neurological disorders, trauma and surgery. Most studies included for analysis defined the interventions (conservative/lowerSpO2 target vs liberal/higherSpO2 targets) based on a pre-fixed standard fraction of inhaled oxygen (FiO2) delivered to the patient, rather than titration of FiO2 to arrive at a target SpO2 range.

For studies on this topic, we searched the Cochrane Central Register of Controlled Trials (CENTRAL), MEDLINE, Epistemonikos, and the COVID‐19‐specific resource covid19.recmap.org published up to 13th October 2021. 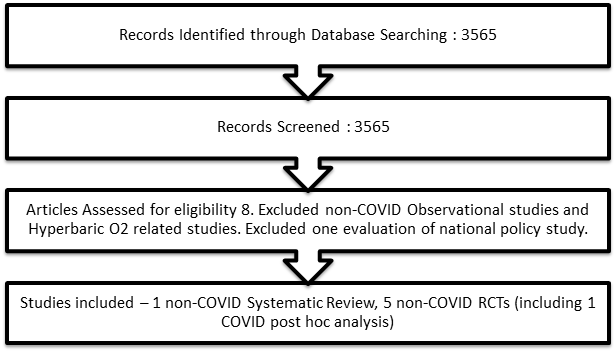 We found the non-COVID IOTA review, five non-COVID RCTs, with one of them performing a post-hoc subgroup analysis of COVID19 patients.

Our population, pre-defined by the Expert Working Group, was in patients with confirmed or suspected COVID-19 with specific sub-populations: Pre-existing COPD, Obesity, Co-existing cardiac failure (acute/chronic) and Age >65 years.

The intervention was defined as active titration of oxygen delivery or respiratory support by measuring saturation at-least every 6 hours to a target SpO2 90-94%.

The comparison was defined as active titration of oxygen delivery or respiratory support by measuring saturation at-least every 6 hours to a target SpO2 95-100%.

We planned to extract data for the following outcomes, predefined by the Expert Working Group:

•  Need for ventilation (IMV or NIV)

•  Time to clinical improvement (WHO ordinal scale or other definitions)

•  Length of stay in hospital

•  Length of stay in critical care

4.  Others as specified by trials/reviews

Two reviewers independently assessed the eligibility of search results. Since all RCTs were non-COVID and the COVID subgroup analysis from the HOT-ICU trial(13) was small and underpowered, we did not perform meta-analysis, and described the findings narratively.

We critically looked at the five non-COVID RCTs and the post hoc subgroup analysis on COVID-19 patients. The definition of the conservative oxygen arm and the liberal oxygen arm was different across the studies (Table 2). The interventions to maintain the desired SpO2 target were also different for each arm and varied across the studies. Table 2 summarizes these essential differences.

The Oxygen ICU Trial 2016reported that patients in the arm with a conservative SpO2 target of 94-98% had lower ICU mortality compared to a more liberal target of 97% - 100% SpO2. The CLOSE 2016 trial and the LOCO2 trial also reported ICU mortality, which did not significantly differ between the two arms.

The LOCO2 trial 2020 showed that a conservative SpO2 target of 88-92% had higher 90-day mortality than a liberal target of greater than or equal to 97%. CLOSE 2016, ICU ROX 2020 trial and Oxygen ICU 2021 also reported 90-day mortality, which did not significantly differ between the two arms.

•  Length of stay in hospital and ICU

The CLOSE 2016 and the ICU ROX 2020 trials reported the number of invasive mechanical ventilation-free days. Neither trial reported a significant difference between the two arms.

Ischaemic adverse events are particularly of concern in the trials that include lower SpO2targets as an intervention. The LOCO2 trial 2020 was prematurely stopped due to mesenteric ischaemia in the conservative (lower) oxygen target arm; 5.1% (1.7%–11.4%) vs 0.  The prevalence of arrhythmias, seizures and Cerebrovascular events were also higher in the conservative oxygen therapy arm. The HOT ICU 2021 trial also reported mesenteric ischaemia, arrhythmias, seizures and strokes, but they were not significantly different between the two arms.

Comments on the non-COVID RCTs.

•  While all these were ICU based trials, only CLOSE 2016, LOCO2      and ICU ROX trials included mechanically ventilated patients at recruitment. OXYGEN ICU 2016 and the HOT ICU 2021 trials included patients in the ICU irrespective of their need for ventilation.

•  The population varied across the trials. The OXYGEN ICU 2016 and CLOSE 2016recruited only 35% of patients with medical causes of respiratory failure, and the rest had surgical causes. ICU ROX 2020 did not mention the nature of the underlying illness and instead provided details on where the patients were brought to ICU from, for example, the emergency ward and operation theatre. 57% of the HOT ICU 2021 trial patients had pneumonia, while the rest had non-pulmonary causes.

•  There was indirectness of evidence due to the differences in SpO2targets in each arm across the various RCTs. None of the trials was close to our predefined definition of intervention (conservative; SpO2 90-94%) and comparison (liberal;95-100%).

•  Some studies monitored partial pressure of oxygen from blood gas analysis while other studies used a peripheral SpO2monitor and some used both. It is well known that cold peripheries, peripheral vascular compromise, abnormal haemoglobin, shock and vasoconstriction can cause differences in correlation between SpO2 and pO2 at a particular point, which limits comparability between trials using SpO2 and those using pO2.

•  Implemented/resulting SpO2varied from the target in some trials. However, as the intervention is a package to achieve a target, the effect of this is unclear on the directness of the evidence.

•  Monitoring of the patients to pick up deviations from the intended interventions was not uniform across studies. While the LOCO2 2020 trial used six-hourly blood gas analysis, HOT ICU 2021 performed blood gas analysis twice-daily.

The HOT ICU 2021 trial was recruiting patients until the latter half of 2020. They had a subgroup of confirmed COVID-19 PCR-positive patients. The authors performed a post hoc analysis of the COVID positive subgroup and published it separately. The conservative saturation target group (paO2 60mmHg) did not reduce mortality compared to the liberal saturation (paO2 90mmhg) target group. However, the conservative saturation target arm had a significantly lower percentage of life support-free days than the liberal arm. This significant difference was not present when the whole HOT ICU 2021 trial data were analysed together, including the COVID-19 and non-COVID-19 participants. Here, life support was defined as the use of invasive or non-invasive mechanical ventilation, or continuous positive airway pressure, infusion of vasopressor or inotropic agents, or any form of renal replacement therapy.

This subgroup had a sample size of around 100 and was not sufficiently powered to describe the outcomes meaningfully. Mortality was around41% in both arms and was generally higher than other RCTs; however this may be explained by the mortality risk of COVID-19 ARDS earlier in the pandemic. At recruitment, 44% of the conservative arm and 55% of the liberal arm were already intubated at baseline. Around 83% of conservative arm patients and 97% of liberal oxygenation group patients required invasive mechanical ventilation at the end of the study. 39% of the conservative arm and 41% of the liberal arm needed intubation for the first time after trial recruitment. Moreover, the oxygenation target was primarily based on twice-daily arterial partial pressure of oxygen. Intermittent SpO2 monitoring was done as per the discretion of the treating doctor to adjust the FiO2 to reach the target pO2 levels. The twelve-hour gap in ABG monitoring could have delayed the adjustment needed in the deviated pO2 to attain the target range. Also, the mortality described is only available for 90 days. Whereas clinically, a one-month mortality would be more useful.

Table 2:  Summary of interventions and saturation targets of the RCTs. We did not consider the IOTA systematic review in the evidence contributing directly to this recommendation due to the population and definition of interventions being overall very far from that in our PICO. The non-COVID RCTs also provided only indirect evidence. One safety concern with lower SpO2 targets emerged from one trial, with mesenteric ischaemia being more common in the group with the lower SpO2 target, though this target (88-92%) allowed lower SpO2 than that considered in our PICO (90-94%). The HOT ICU trial was a post hoc analysis with 109 patients and the data is not powered adequately to make meaningful recommendations.

Please read the following statements and click ‘Agree’ before proceeding: