This recommendation applies to acute COVID-19 in adults. Some of our recommendations vary according to the severity of COVID-19 illness. Definitions of the categories are based on the World Health Organization (WHO) criteria and can be viewed by clicking the plus (+) signs below.

RECOMMENDATION: We do not recommend Hydroxychloroquine (HCQ) or Chloroquine for treating COVID-19. There is no demonstrable benefit and there is potential toxicity.

Pneumonia with ANY ONE of the following:

HCQ and Chloroquine have been shown to have antiviral activity in vitro against various RNA viruses like Rabies virus, Chikungunya, Influenza A and B, etc and hence they were considered potential candidates for treating COVID-191. Mechanisms of action are quite varied including interference with ACE-2 receptor glycosylation preventing SARS-CoV-2 binding to target cells, interference with SARS-CoV-2 attempts to acidify the lysosomes, inhibition of cathepsins, alteration of molecular crosstalk between SARS-CoV-2 and target cells and virion assembly and binding.

Some early research shared widely in social and conventional media fueled the belief these drugs were effective. However, these studies were small, non-randomised and/or of low quality2, and some were later retracted due to likely fraudulent research3. Widespread use of HCQ/CQ during the pandemic led to an acute shortage of the drug for conditions such as rheumatological diseases.

There was high quality evidence to suggest that critical outcomes such as all-cause mortality and negative PCR at day 14 were not different between individuals receiving HCQ/CQ vs. Standard of care/placebo. Other important outcomes of interest such as progression to mechanical ventilation and time to clinical improvement (low quality of evidence) were also not different between HCQ/CQ and comparison groups (placebo or standard of care). Furthermore, there was increased incidence of adverse events and QT interval prolongation on electrocardiography with HCQ/CQ use compared to no HCQ/CQ (low quality of evidence). Although, there are no major cost implications, in view of lack of evidence of benefit and evidence of harm, we strongly recommend against the use of HCQ/CQ in COVID-19 of any severity. a.  Downgraded by one level (indirectness). Arabi et al contributes to 33% of the weight of outcome (only severe patients included).

b.  Downgraded by one level (serious imprecision) [11% benefit and 53% harm increases uncertainty]

c.  Downgraded by one level: Risk of Bias (serious)

d.  Downgraded by one level due to: Wide confidence interval, only a single study used to assess this outcome

e.  Downgraded by one level due to serious risk of attrition and reporting bias.

f.  Downgraded by one level due to high heterogeneity: I2= 81%

g.  Downgraded by one level: for serious imprecision for the given outcome (wide CI)

h.  Downgraded by one level: Risk of bias unclear to high in most of the studies

i.  Downgraded by one level: Wide confidence interval and optimal information size (OIS) criteria not met

j.  Downgraded by one level: One study showing higher incidence in the standard of carearm has high risk of attrition and reporting bias

k.  Downgraded by one level due to high heterogeneity:I2 = 59%

SARS‐CoV‐2 is a novel coronavirus that has caused a pandemic since December 2019. Over 350 million people have been diagnosed with COVID‐19, and as of 25th January 2022, over 5.6 million people have died.4 Severe disease is characterized by hypoxia and progressive acute respiratory distress syndrome appears to be the main driver for mortality, although patients can experience a syndrome with clinical and laboratory features of severe systemic inflammation, termed a “cytokine storm”. At the other end of the spectrum, asymptomatic infection is not uncommon; national Italian data described this in approximately 10% of all people with a confirmed COVID‐19 diagnosis, though more recent estimates have been higher5. More recently, wide‐ranging longer‐term morbidity has been described in the absence of a severe initial illness.6

This review aims to provide a summary of the available evidence from randomized controlled trials (RCT) of Hydroxychloroquine/Chloroquine for treatment of COVID-19, for any duration, which could guide clinicians and researchers regarding the appropriate use of this drug in the future.

We searched PubMed and Epistemonikos, for studies of any publication status and in any language. We also reviewed reference lists of systematic reviews and included studies. We performed all searches up to 31st July 2021.

Data extraction was performed in context with the following PICO:

Patients who are symptomatic with confirmed or suspected COVID-19:

Two reviewers independently assessed eligibility of search results using the online Rayyan tool. Data extraction was performed by one reviewer, and checked by another, using a piloted data extraction tool on Microsoft Word. Risk of Bias (RoB) assessment for the 10 studies in the Cochrane review were included directly from the Cochrane Review7 . RoB for the 16 new RCTs  was assessed using the Cochrane RoB v1.0 tool. For all outcomes, one review author performed the assessment, and cross-checked it against the assessment by another review author (who used consensus approach).  The whole RoB assessment was scrutinised by the whole author team for this review. We planned to use risk ratios (RR) for dichotomous outcomes and mean differences (MD) for continuous outcomes, with 95% confidence intervals (CIs). We planned to meta-analyze if appropriate, i.e., if outcomes were measured and reported in a similar way for similar populations in each trial, using random-effects models with the assumption of substantial clinical heterogeneity (the appropriateness of which would be checked by the Methodology Committee), and the I2 test to calculate residual statistical heterogeneity, using Review Manager (RevMan)v5.4. We used GRADE methodology to make summary of findings tables on GRADEPro GDT.

We found 26 RCTs (10 from the Cochrane review and 16 new RCTs) that matched the PICO question. The severity of disease varied from mild to critical. A few important details of these trials are provided below: 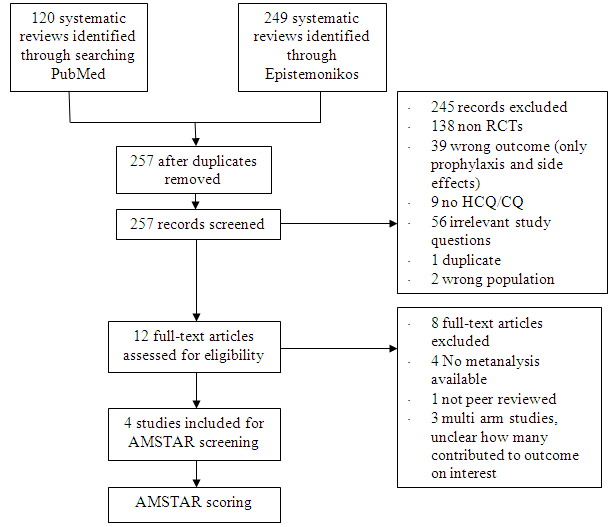 Hydroxychloroquine/Chloroquine compared to Standard of Care

Characteristics of all the trials have been summarized in the Summary of characteristics of included trials table. All the trials have varying risk of bias across all domains. Our expert working group classified all-cause mortality, progression to mechanical ventilation, progression to non-invasive ventilation and participants with serious adverse events as critical outcomes, while outcomes like negative respiratory PCR at Day 14 from randomization, time to clinical improvement, participants with any adverse events and participants with prolonged QTc on ECG were classified as important outcomes. HCQ/CQ compared to standard care without HCQ/CQ, or placebo A summary and then more detailed explanations of the Expert Working Group's (group)judgments follow.

Note that the group decided to apply the recommendation to both Hydroxychloroquine (HCQ) and Chloroquine (CQ), due to their very similar mechanism of action and other properties.

The COVID-19 pandemic in India with more than 41 million cases and over 0.48 million deaths has significantly impacted and stressed the health structure of the country. The onslaught of the delta variant created a shortage of intensive care unit beds, oxygen and trained personnel with the country facing a major health crisis. The group judged the problem to be of utmost priority.

The group agreed that there was high quality evidence suggesting that HCQ/CQ did not reduce mortality, or time to negative PCR. There was low to very low-quality evidence suggesting HCQ/CQ did not impact progression to non-invasive mechanical ventilation and mechanical ventilation, or even time to clinical improvement. The group discussed and concluded that the desirable effects were trivial.

The pooled data suggested that hydroxychloroquine/chloroquine did not have clinically significant serious adverse events but overall did slightly increase adverse effects and QT prolongation (this is well known adverse effect of HCQ/CQ). However, it was found to be safe when used long term in smaller doses, but several larger trials have used higher doses.

The EWG felt that all the outcomes including those of mortality, negative PCR by day 14, progression to mechanical ventilation and adverse events were expressed variably in the studies. However, there is probably no important uncertainty or variability on how people would value the main outcomes. Some concerns about limited evidence on need for hospitalisation and time to clinical improvement; therefore evidence presented was skewed towards those more important for severely-critically unwell patients.

The group felt that the balance of effects favors the comparison. The group felt that there is no convincing evidence to prove the benefit of this intervention but possibly some harms. The group also noted that in many studies there was an active comparator drug that could also have adverse effects, however the assumption made in this analysis here, is that this would be equal to no HCQ/CQ which may not be entirely accurate. In addition some studies mentioned patients with suspected COVID-19 were given HCQ/CQ which again could overestimate the side effects and underestimate the efficacy or vice versa.

The group felt that there were negligible costs and savings. The erratic supply chain had led to an increased demand for this drug during the initial phase of the first wave of the pandemic despite its uncertain clinical benefits until the drug was removed from the ministry of health guidelines for covid-19 on August 20th 2021. Costs of managing adverse events, or monitoring associated with specific events such as QT prolongation, might not be negligible. The group includes clinicians in different types of Indian hospitals who have a good idea of drug and hospitalization costs.

Certainty of evidence of required resources

No studies reporting this were reviewed by the group but the clinicians in the group were aware of the cost and hence felt that there was high certainty of evidence for required resources to implement this intervention. Drug is not expensive, but costs of managing prolonged QT can be considerable (involves ECG, monitoring etc)

No effectiveness studies were included, so with a no-HCQ/CQ comparison, this could be proposed to favour the comparison, but as there is no evidence for this, we have agreed to not pass judgement on this. Also, we would not treat people with “placebo” so we can’t use that to consider it more cost effective.

At this point in time this intervention probably reduces equity due to cost and need for hospitalization. There was an observed indirect impact on equity for patients who are using HCQ/CQ for other indications, many of whom are taking it long-term, when demand soared for it for covid-19 treatment.

The group felt that this intervention is likely to have no acceptance because there is no observed effect but only harm.

This is probably a feasible intervention because it is an oral drug and of low cost. However, manufacturing may lag behind demand and also it causes significant discomfort with high-dose acute use. That’s why/how it got sold/used in large quantities.

Hydroxychloroquine/Chloroquine is widely available and is used frequently for the treatment of malaria and some autoimmune conditions. It is an oral drug, and hence easy to administer in the outpatient setting. It is relatively inexpensive, but has moderate risk of adverse effects. It has been used indiscriminately in the treatment of COVID-19 without evidence of efficacy, and may be associated with direct or indirect harms. Its use may lead to a false sense of security and delays in getting appropriate medical care, as well as implementation of other measures which are of proven benefit. The evidence currently does not justify the use of Hydroxychloroquine/Chloroquine.

Our strong recommendation against the use of HCQ/CQ applies to all subgroups of patients with COVID-19. The group considered all trials of HCQ/CQ and found no subgroups where there was benefit in clinically meaningful endpoints whether evaluated by severity or co morbidities. There is limited data available assessing its use in patients with COVID-19 with liver or kidney disease.

The recommendation against the use of Hydroxychloroquine/Chloroquine will be reviewed as and when any new evidence emerges. Although the evidence for discontinuation of the drug because of the undesirable effects reported with widespread use such as cardiac arrhythmias, QT prolongation & CQ retinopathy (bullous maculopathy) have so far been low, this needs careful monitoring as the potential for drug-related harm cannot be ruled out and may emerge in future with the reported dosage used in the treatment of COVID-19.

Please read the following statements and click ‘Agree’ before proceeding: